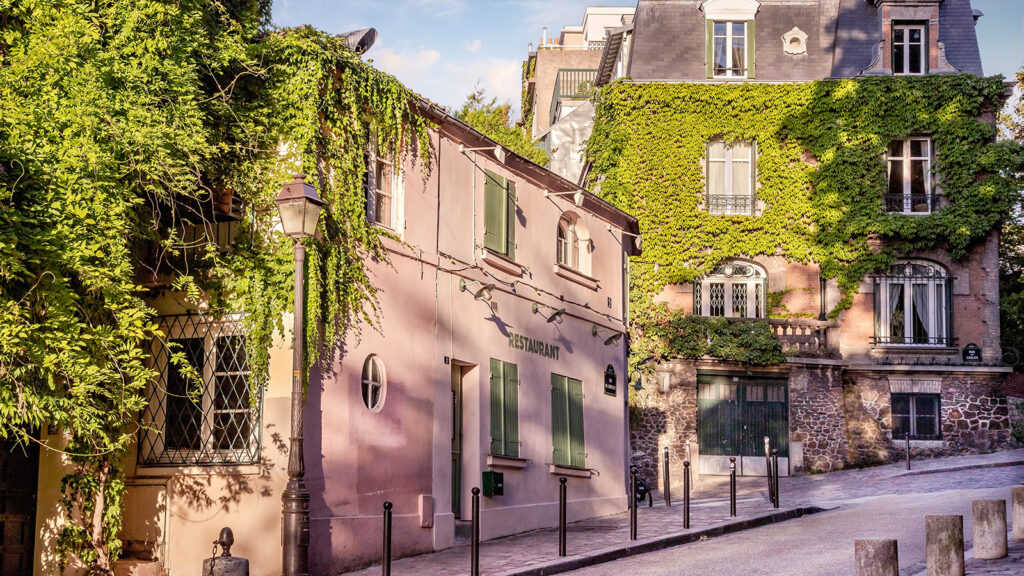 In this post, I want to share ten of my favourite photography locations in Montmartre in the north of the effortlessly photogenic city of Paris. Montmartre sits on a hill or “butte” and for most of existence, was a seperate village just outside it’s much larger neighbour. It was eventually incorporated into the city of Paris in 1860. Despite this, Montmartre has retained its sense of independence as well as its village character. This makes it a fascinating and attractive location for photography. Here are ten locations that every photographer should add to their “to do list” when visiting Montmartre. The photos in this series were taken over the space of a few hours on a balmy Parisian evening in July 2022.

Many visitors to Montmartre arrive at Anvers metro station. After battling your way through the crowded and tourst shop lined Rue de Steinkerque, the gleaming domes of the highly distinctive and frankly out of place Sacré Coeur Basilica loom into view. This edifice, completed relatively recently in 1914 is not at all in harmony or scale with rest of Montmartre. Nonetheless, it certainly provides for an interesting photographic subject. It was the obvious choice to kick-off this guide to my favourite photography locations in Montmartre. I took this simple evening shot from the base of the hill where the basilica sits. While taking the shot, I was simultaneously fighting off the advances of a street hawker who was trying to sell me a genuine Billy Vuiton suitcase. It was made by Mr Vuiton himself that very morning apparently.

Hungarian-French photographer Henri Brassai captured one of my favourite Paris photographs on the steps that run alongside the funicular that runs up the hill to Sacré Coeur Basilica. Whereas he photographed this charming location bathed in the gorgeous side lighting of an early winter’s morning, I came here at night in order to capture the street lamps that run down the centre of the steps while they were illuminated. This proved trickier than expected due to the presence of groups of extreme-fitness practitioners manically running and hopping up and down the steps while shouting appropriately manly and motivating slogans to each other and anyone else in earshot. Thankfully, such exertions are unnecessary for me as I am already in shape. Round is a shape after all.

Le Consulat cafe sits amongst the jumble of narrow streets close to the bustling Place du Tertre with its expensive restaurants and artist stalls. The Consulat was the favourite haunt of some of the most famous artists who called Montmartre home including Picasso, Toulouse-Lautrec and Monet. The distinctive narrow building itself and the surrounding cobbled streets with the dome of Sacré Coeur just visible in the background make this area one of the most compelling and fruitful photography locations in Montmartre.

A few minutes walk from Le Consulat, we find another historic Montmartre institution, Au Lapin Agile. This cabaret venue has been around since 1860 under various names. Like the nearby Consulat, it was frequented by some of the most famous names of the time. Mogdigliani, Ernest Hemingway and Charlie Chaplin were all entertained here. Picasso even paid for his drinks with one of his paintings!

The sloped cobbled streets, rickety fencing and small scale of Au Lapin Agile seem very far from the sweeping wide and elegant Haussmanian boulevards only a few streets away. The old chanson venue has been a favourite subject for artists for many decades and it makes for a great photographic subject too. Unfortunately the current owners refused my offer to pay for my drinks with an NFT. I mean who wouldn’t want to be the owner of a receipt proving ownership of a file on the internet?

Rue de l’Abeuvoir is without doubt one of the most picturesque streets in Montmartre and that’s saying something. The the rustic ivy covered buildings and establishments such as La Maison Rose (to the left in the above photo) encapsulate that village atmosphere and provide some irresistible photographic opportunities.

I returned to Rue de l’Abreuvoir at blue hour when the rampaging hoards of comically posing “influencers” had gone off to post photos of their meals in a nearby restaurant. This time, I headed to the far end of the street by Place Dalida. From here, there is a beautiful view of the street as it winds gracefully up the hill towards and the domes and spires of Sacré Coeur become visible in the distance. One thing to be wary of here (apart from rampaging influencers) is the regular stream of brightly painted Citroens 2CVs whizzing down the street as the drivers give a whistlestop tour of the area to their passengers. I almost got flattened by one driven by a guy who was paying far more attention to his two female passengers than the road ahead!

I mentioned La Maison Rose earlier and it deserves some attention in its own right as a photography location. The pale pink walls and bright green shutters make this a striking building. Like Le Consulat and Au Lapin Agile, it has welcomed many famous Montmartre residents over the years. It opened in about 1850 but didn’t gain its distinctive pink colour until 1905 when new owner Laure Germaine decided to give the exterior a makeover as well as its iconic name.

The steps leading to Lamarck-Caulaincourt Metro Station has long been one of the most popular photography Locations in Montmartre. The bright red metro sign, steps, street lamps and busy café lined streets below make for an interesting subject. It’s one of those shots with no particular main subject. Rather,the eye can wander around the frame noticing small details like the man sitting at the bottom of the steps or the yellow sign to the right at then entrance to “Les Dessous de Ginette” or “Ginette’s Underwear”. I wonder if one day I might have a venue named after my under garments. Barry’s Boxers has a nice ring to it I think.

At the top of the steps, you will find the Chez Ginette café. The neon signs, street light and bustling atmosphere make for another interesting photographic opportunity. I love photographing café scenes and luckily for me, Paris and Montmartre in particular has no shortage of them.

Le Progrés on Rue des Trois Frères (above) is another nearby café worth photographing. Le Café des Deux Moulins on Rue Lepic made famous in the film Amélie is also only a short walk from here. My attempts to photograph it however were thwarted by the bane of the urban photographer…… the large white van parked in the middle of the frame! On many occasions, such vans have conspired to ruin my photos. I’m not paranoid or anything but I’m nearly sure it’s the same van following me around bent on spoiling my photos.

The Wallace Fountains dotted around Paris are one of my favourite features of the city. These handsome dark green fountains have been dispensing potable water to Parisians since the 1870s. They were built as a gift to the city by wealthy Englishman and Paris-lover Sir Richard Wallace as a way of providing clean drinking water to Parisians and to keep them away from alcohol. Well, at least he was half-successful. A fine example of one of these fountains can be found on the pleasantly tree shaded Place Émile Goudeau in Montmartre. I tend to avoid taking photographs when the sun is high in the sky but in this case it provided an attractive sunburst of light behind the top of the fountain.

Metro entrances make for interesting photographic subjects with the variety of styles, signs and surrounding street life. Few however, compare to the handsome Metro station entrance at Abbesses. It is one of only two of its type remaining in Paris (the other is located at Porte Dauphine). These “dragonfly” entrances were designed by Art Nouveau architect Hector Guimard who was responsible for designing 141 similar metro entrances in Paris. It’s a real shame that so few remain today.

The final stop on our photographic tour brings us to yet another Paris institution, The Moulin Rouge. This world famous risqué cabaret venue gave us chorus-lines, the Can-Can and the wonderfully vibrant advertising posters of Toulouse-Lautrec. Now the Moulin rouge is not actually in Montmartre but just outside it in Pigalle. However, it is so close, it would be shame not to pay a visit when exploring Montmartre with your camera.

This was tricky shot to take. It took about a dozen attempts to get the right amount of motion blur on the blades of the famous red windmill and to capture them at best angle for the photo. I also had to wait for a break in the traffic on the permanently traffic choked Boulevard de Clichy. At least there was no white van parked in the middle of the frame. This time I had to wait for a red van to move. At least it matched the windmill I guess.

What are your favourite photography locations in Montmartre?

That concludes my tour of ten of my favourite photography locations in Montmartre. I hope it helps and inspires you to go and take your own photographs in this intriguing and distinctive district of Paris. Please share some of your own favourite photography locations in Montmartre along with links to your own photos in the comments below. No doubt there are more great locations I haven’t mentioned in this article. You can see more of my Paris photography on the France gallery page. Thanks for reading and may you never have your city photographs blighted by an inconveniently parked white van.

I am a travel photographer from Dublin, Ireland. I specialise in urban, street and landscape photography. I enjoy combining my love of photography and travel. There's little I enjoy more than wandering around a new location with my camera at the ready. I also teach photography and am the author 'Outdoor Photography Essentials' - a collection of my photography tutorials.

This site uses Akismet to reduce spam. Learn how your comment data is processed.

We use cookies on our website to give you the most relevant experience by remembering your preferences and repeat visits. By clicking “Accept All”, you consent to the use of ALL the cookies. However, you may visit "Cookie Settings" to provide a controlled consent.
Accept AllCookie SettingsRead More
Manage consent

This website uses cookies to improve your experience while you navigate through the website. Out of these, the cookies that are categorized as necessary are stored on your browser as they are essential for the working of basic functionalities of the website. We also use third-party cookies that help us analyze and understand how you use this website. These cookies will be stored in your browser only with your consent. You also have the option to opt-out of these cookies. But opting out of some of these cookies may affect your browsing experience.
Necessary Always Enabled
Necessary cookies are absolutely essential for the website to function properly. These cookies ensure basic functionalities and security features of the website, anonymously.
Functional
Functional cookies help to perform certain functionalities like sharing the content of the website on social media platforms, collect feedbacks, and other third-party features.
Performance
Performance cookies are used to understand and analyze the key performance indexes of the website which helps in delivering a better user experience for the visitors.
Analytics
Analytical cookies are used to understand how visitors interact with the website. These cookies help provide information on metrics the number of visitors, bounce rate, traffic source, etc.
Advertisement
Advertisement cookies are used to provide visitors with relevant ads and marketing campaigns. These cookies track visitors across websites and collect information to provide customized ads.
Others
Other uncategorized cookies are those that are being analyzed and have not been classified into a category as yet.
SAVE & ACCEPT